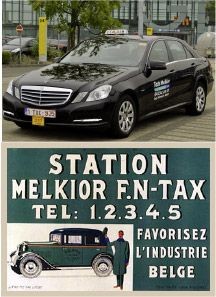 In 1912, Sir Leon Melkior started an activity of passengers and goods’ transport in Liège that became through the 1920’s, the Taxis Melkior company.

Since then and for many generations, the symbol MELKIOR is associated with an efficient taxi’s service combining professionalism and punctuality.
Indeed, Melkior’s taxis are presents in the heart of Liège area over more than a century, allowing them to benefit from an unparalleled know-how in their business: it’s a renowned, serious and reassuring brand.

Based at the Quai de Rome 30 in the center of Liège, and with over 80 employees, the organisation acquired a strong reputation among the numerous taxi companies in Liège. It has 33 licenses granted by the cities where it operate its taxis and in 2006, a chauffeured car renting service of 10 vehicles was  integrated. It also runs several school bus circuits in collaboration with the TEC company.

Taxis Melkior integrated the Keolis’ group in 2008, enabling an extension of its network and the pursuit of modernisation efforts thanks to the pooling of core competencies (Purchase, Marketing, Accounting...).

With the same willingness to put the client in the heart of its priorities, this integration and the experience gained by Taxis Melkior offer new perspectives to face the strong competition in passengers’ transport market.